During the next seven years the choir grew in size and around twenty people began singing in two-part harmony.

Many a talented musician took over the choir and by 1990 the choir had swelled to 34 members and was invited to sing with Spanish choirs, fiestas and singing for the Catholic Church on Easter Day, Christmas and Corpus Christie. Another group called Friends in Harmony was formed and eventually joined our choir.

In 1994, the Town Hall in Teulada asked the choir to register as an association. In May 1994 the English Choir Teulada was officially created!!

The choir has seen a number of musical directors and accompanists but in 2004 we were delighted to welcome Heather Butcher as our accompanist. Jo Baldwin took over the baton in 2009. She gently shook us up and pushed us to our physical, mental and musical limits. Her enthusiasm, musical and language skills have been very welcome and have helped the English Choir to reach the strong position it now holds in life on the Costa Blanca. 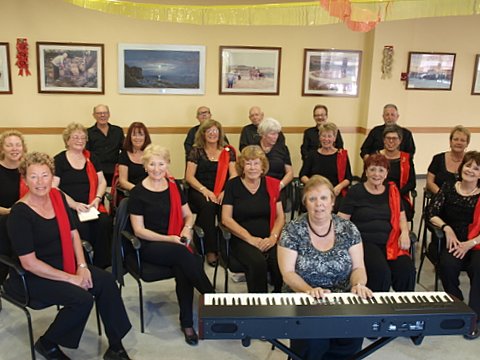 The choir prides itself on a wide and varied repertoire and is never afraid to try something new to add to the programme. We have performed many times for various Moraira/Teulada occasions from singing for the Pensionistas, the Moors and Christians celebrations both in the church and standing above the beach singing during the re-enactment. We sang for the British Legion at their 90th anniversary celebrations in a brand new concert hall in Alicante.

We have also sung in the excellent Teulada Concert Hall (Auditorio) on a number of occasions with other local choirs. At Christmas we performed in the village square in Lliber, competing with ponies, geese and other noises! It was a wonderful atmosphere enjoyed by choir and audience.

In 2017 we look forward to performing concerts on 20th April 7pm in Moraira Church, Moors and Christians in June and further concerts in October, November and December.